The Holiday Season engenders feelings of empathy, kindness, and tenderness, especially for those a little down on their luck.

On Giving and Generosity

Giving and generosity are defined as the transfer of something without the expectation of receiving something in return.

When expecting nothing in return, the benefits of giving are exponentially higher than if giving and expecting payback.

Generous giving ensues, making the season even brighter, certainly for the receiver of the kindness but more strangely and predictably, for the giver as well. What might be perceived as a loss or a deficit by the giver is quickly overshadowed by feelings of well-being.

When considering the benefits of giving, the giver often benefits economically via tax breaks. If the giving is public, the gift builds the status of the giver by signaling to the community wealth, thus giving the giver status.

In a book entitled, The Rockefeller Billions, by Jules Abels, Rockefeller’s philosophy is explained: He believed that if he stopped giving his money away in the right way, God would take his money away from him.

In 2006, Oprah Winfrey, a billionaire and one of the greatest black philanthropists in American history, gave 300 people in her audience $1000.00 and one week to spend the money on a good cause.

On Giving, Joy, and Endorphins

Giving provides an unexplained euphoria that instantaneously spreads through your body. This euphoria, this sense of joy is different from the happiness of receiving a gift, even if the gift is a diamond necklace.

This feeling is an elation and elevation of the soul.

You forget your own problems for a small moment in time and focus on the peace and love found in helping another human being.

To achieve the good feelings, you do not have to spend money. Offering your time to a colleague to help finish a project, lending something as simple as your stapler, or merely spending time with someone who seems alone can make you feel satisfied.

I was inspired by an anonymous woman who kicked off a giving-spree throughout the United States.

She wanted to honor her husband who recently passed away so she visited a local K-mart store and paid off the lay-away accounts for numerous people. As the AP story states: 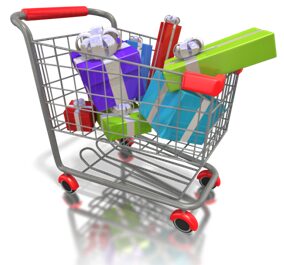 OMAHA, Neb. (AP) — The young father stood in line at the Kmart layaway counter, wearing dirty clothes and worn-out boots. With him were three small children.

He asked to pay something on his bill because he knew he wouldn’t be able to afford it all before Christmas. Then a mysterious woman stepped up to the counter.

“She told him, ‘No, I’m paying for it,'” recalled Edna Deppe, assistant manager at the store in Indianapolis. “He just stood there and looked at her and then looked at me and asked if it was a joke. I told him it wasn’t, and that she was going to pay for him. And he just busted out in tears.”

On Wings and a Prayer

I have also been impressed by a nonprofit, Luke’s Wings.

Luke’s Wings is an organization dedicated to the support of military service members who have been wounded in battle. Luke’s Wings provides families with the airline tickets to visit their loved ones in the hospital and to be with their service members during recovery and rehabilitation.

This year they have been making Christmas much brighter for many honorable servicemen and women. To learn more, visit www.lukeswings.org.

No matter when you choose to give, there are infinite opportunities in your world every day.

Giving and the Organization

So, we know how giving benefits you personally and benefits the people you help, but how does giving relate to charismatic leadership?

In an article entitled, Why Giving Matters, Arthur C. Brooks who is president of the American Enterprise Institute for Public Policy Research makes the case that if you want to be seen as a leader and if you want to be happier, then give more.

“If people see you as a giver, as someone who cooperates and serves others, they see you as a leader and they will want to follow you.”

Giving also makes individuals more productive. Because giving puts you in a positive mood, you are able to concentrate on your work, make decisions, get ideas to solve problems – you are more productive. This diagram illustrates the process.

People who give, share of their resources, volunteer their time, show empathy, and help others in the countless opportunities presented each day are happier people.

Don’t take my word that giving makes a difference in your leadership stature. Make a New Year’s resolution to give this process a try. Model for your employees a giving spirit and extend your hand to help when appropriate.

Your employees are always watching you.

They will imitate your good works and our organization will flourish.